Originally published by Sophia Lauber at al.nd.edu on May 19, 2021.

After growing up in a neighborhood where many of his friends didn’t make it to college, senior Diego Reynoso knows firsthand the challenges facing students in low-income communities.

Now, as the second person in his family to graduate from college, Reynoso hopes to use his Notre Dame education to empower Latino communities and marginalized individuals.

His time in the College of Arts & Letters and the Institute for Latino Studies, he said, have given him the skills, resources, and support to do so.

“I do this for my family because they never had the opportunities that I have right now,” he said. “Just doing the most I can to help those who come from similar situations means the world to my family.”

“In the College of Arts & Letters, I have been able to study and do whatever I need to do without any regrets, which has really opened me up and allowed me to focus on what I really care about — helping people. An Arts & Letters degree really helps me stay focused on the people aspect in everything I do, and I think that will be applicable to every opportunity I will have after college.”

‘I gained a new family’

Majoring in political science and economics, Reynoso has sought to focus on the human aspect of each of his academic disciplines.

“Political science really focuses on people a lot, and it was that aspect of political science that really intrigued me,” Reynoso said. "Economics has allowed me to focus on the rationales used by both the firm and the individual to make decisions that impact the greater society. It’s allowed me to look at the effects of policy in a different, more rational, light." 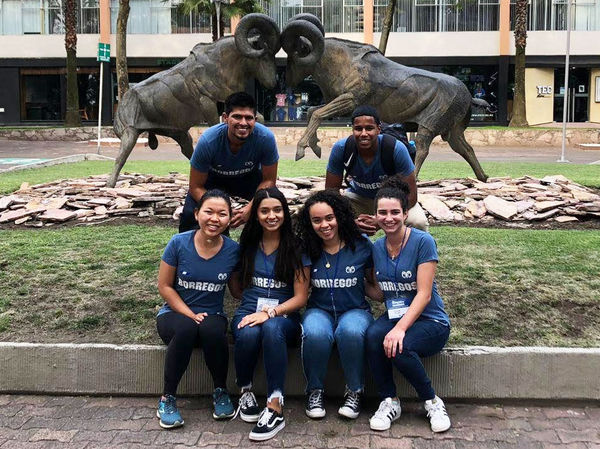 Reynoso in Mexico City with other members of the Latino Studies Scholars Program.

In his sophomore year, Reynoso decided to add a minor in Latino studies after a conversation about Latino politics with ILS director< Luis Fraga, the Rev. Donald P. McNeill, C.S.C, Professor of Transformative Latino Leadership, Joseph and Elizabeth Robbie Professor of Political Science.

That year, Reynoso was also chosen to be part of the Latino Studies Scholars Program, a merit-based scholarship and academic initiative run by ILS, which has proven to be an invaluable resource.

“Once I became a Latino Studies Scholar, I gained a new family,” he said. “I live 30 minutes from Notre Dame, but it’s a completely different world. People here are very different from the people I grew up with, and receiving that scholarship and joining the ILS family allowed me to meet like-minded students who also want to help Latinos in the future.”

ILS has also enabled Reynoso to form deeper connections with faculty, some of whom have become mentors to him in terms of career discernment and development.

“They’ve really helped me through every struggle. Whenever I was trying to find an internship, they were there giving me resources,” he said. “They’ve done their best to help me, and it's just given me a whole new set of opportunities.”

The institute has connected Reynoso with individuals in the nonprofit sector and the field of criminal law to further explore his career options and interests.

In the spring of his junior year, Reynoso participated in Notre Dame’s Washington Program — a study-away semester in the nation’s capital — and interned with the Georgetown Law Center. There, he helped two public defenders investigate their cases and gained greater insight into the field, which solidified his interest in going to law school.

Reynoso’s passion for criminal law comes from having witnessed friends go through the criminal justice system, where he feels many of them have been written off as undeserving of a second chance.

“What they don’t know is that they didn’t have a first chance to begin with,” Reynoso said. “They come from poverty, from single-parent households, and from places where crime can feel like the only option to survive. And when you understand that, you don’t see them as criminals anymore — you see them as friends. I feel like I need to help them as best I can, and I see criminal law being the best way to do so.”

I see myself in them’

While at Notre Dame, Reynoso has participated in the College Mentors for Kids program and has been involved with the Boys and Girls Club in South Bend — an opportunity he discovered during a Summer Service Learning Program through the Center for Social Concerns.

“I understand where the kids come from, and I see myself in them a little bit,” he said. That kind of thing grounds me and keeps me focused and helps me understand what I’m doing and who I’m doing it for.” 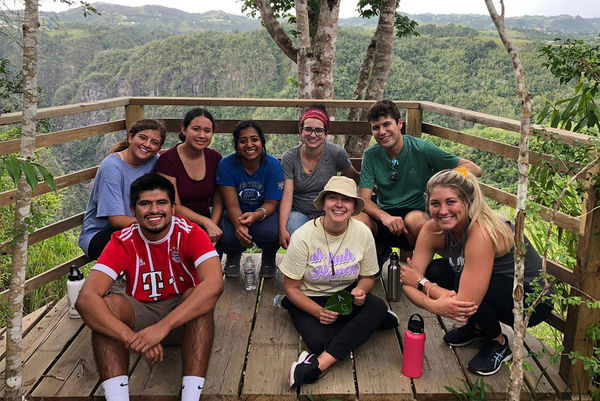 Reynoso with the other members of his Cross-Cultural Leadership Program experience in San Juan, Puerto Rico.

In addition to the immersive experience, CCLP offered a course that focused on diving deeper into the impact service has on the larger community.

“Both ILS and CCLP do a really good job connecting the small thing you are doing to the bigger picture,” Reynoso said. “Trying to draw kids to the after-school program was difficult and sometimes disheartening. But, at the end of the day, you have to remember that if you can help even just one kid graduate high school, you can give them the opportunity to do something greater.”

Before law school, Reynoso will be teaching middle school social studies and religion in Denver for two years through the University’s Alliance for Catholic Education. He looks forward to building on the various experiences with youth development he has had at Notre Dame.

“Most of my activities have been dealing with low-income, inner-city kids, and that’s what ACE focuses on, as well,” Reynoso said. “You go right in and start helping underprivileged kids in one of the most crucial ways you can — through education — because once they have an education, they can create opportunities for themselves.”

Supported and encouraged by the ILS family, Reynoso has already found many ways to serve disadvantaged communities and hopes to continue doing so after his ACE experience. He credits the flexibility of an Arts & Letters education with enabling him to follow his passions and engage in a wide variety of opportunities during the past four years.

“In the College of Arts & Letters, I have been able to study and do whatever I need to do without any regrets, which has really opened me up and allowed me to focus on what I really care about — helping people,” Reynoso said. “An Arts & Letters degree really helps me stay focused on the people aspect in everything I do, and I think that will be applicable to every opportunity I will have after college.”