Two AICSN physical education teachers attended the Play Like a Champion Conference at Notre Dame. Read about more about their experiences by clicking "continue reading" 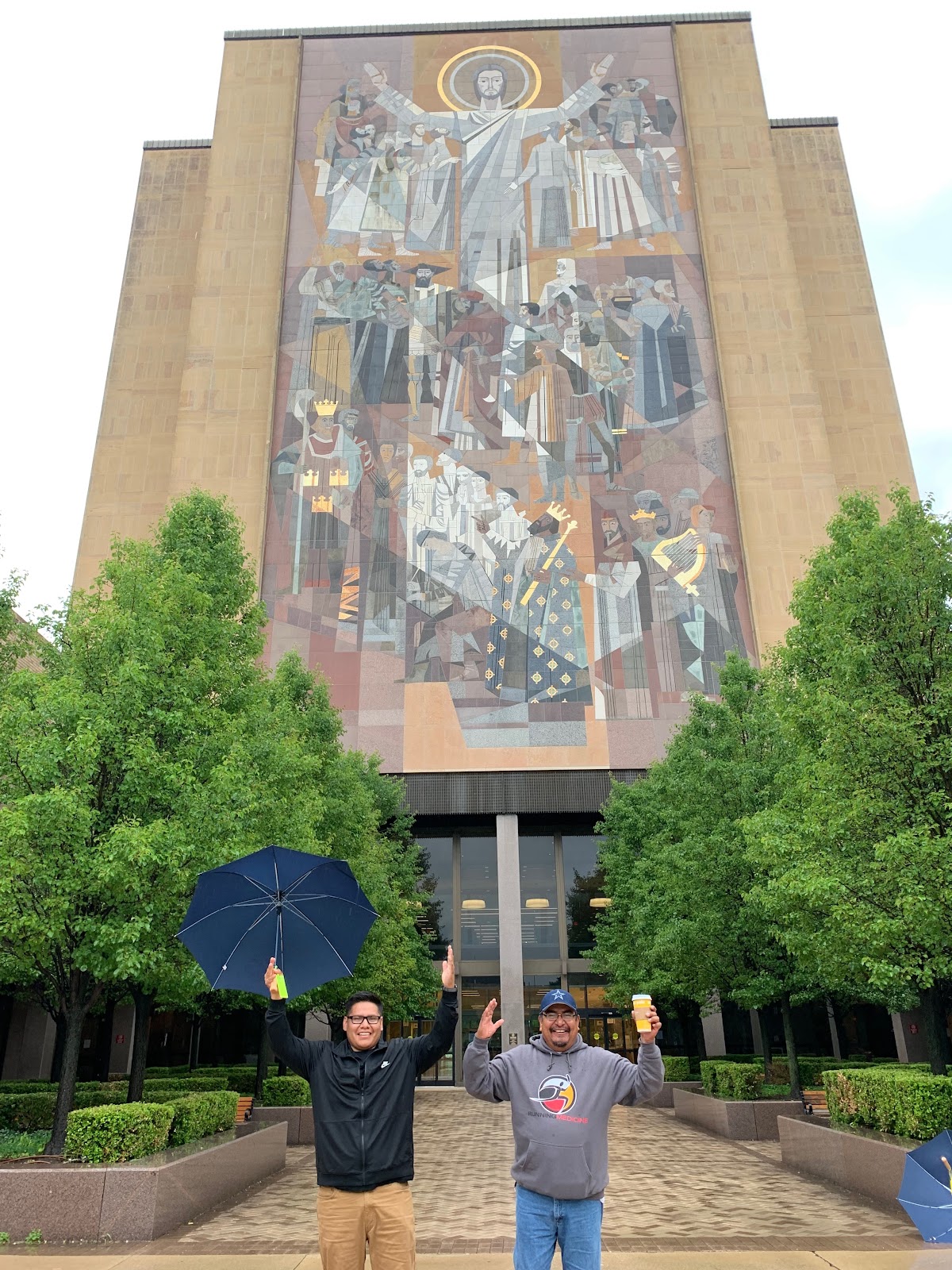 In 2006 F. Clark Power, a psychology professor at Notre Dame, founded the Play Like a Champion Today Educational Series. He was concerned about the growing crisis in youth sports—the cost of playing sports was rising, many children were being overlooked, and some coaches and parents were putting too much pressure on young athletes. With the help of some colleagues, Power started this impactful program to promote children’s physical, social, and moral development, with a focus on coaches putting the well-being of children first. This program gives all students the opportunity to play and be part of a team while having adult mentors who care about their success.

The conference takes place each June and the theme of the conference this year was “A Team for Every Child.” This theme was chosen because so many children lack access to play sports or reap the benefits of being part of a team. The American Indian Catholic Schools Network (AICSN) had the privilege of sending two of their physical education teachers to this conference, Gabe Levantonio (right) from Saint Joseph Mission School in New Mexico and Carl Adams (left) from Saint Michael Indian School in Arizona. Power commented, “Gabe and Carl made a wonderful contribution to our conference discussions as individuals and as members of communities that had not yet been a part of the Play Like a Champion family.  They are a part of that family now.” The AICSN teachers are enthusiastic to take what they learned and apply it within their communities that are typically underserved and under resourced. Some members of The Play Like a Champion education team are now planning to travel to Gabe and Carl’s schools in the fall to spread the program to those who truly identify with the mission of the conference. This includes other schools in their dioceses and throughout Indian Country. Power said, “We are committed to providing whatever support we can to the Native American schools in AICSN and beyond.”

Peter Piscitello is the Manager of Outreach and Operations Support for Play Like a Champion. Together with Professor Power, he advocated for Gabe and Carl to attend this conference. Piscitello has worked with the conference since 2011 and truly feels as if he is part of a growing family. He said, “We consider those who attend the conference and are ongoing partners with Play Like a Champion to be part of our ‘family’ and that's exactly what this feels like, an annual reunion with an incredible group of leaders from across the country.” He believes in the power of sports to change the lives of students. He looks forward to the continued growth of the conference. 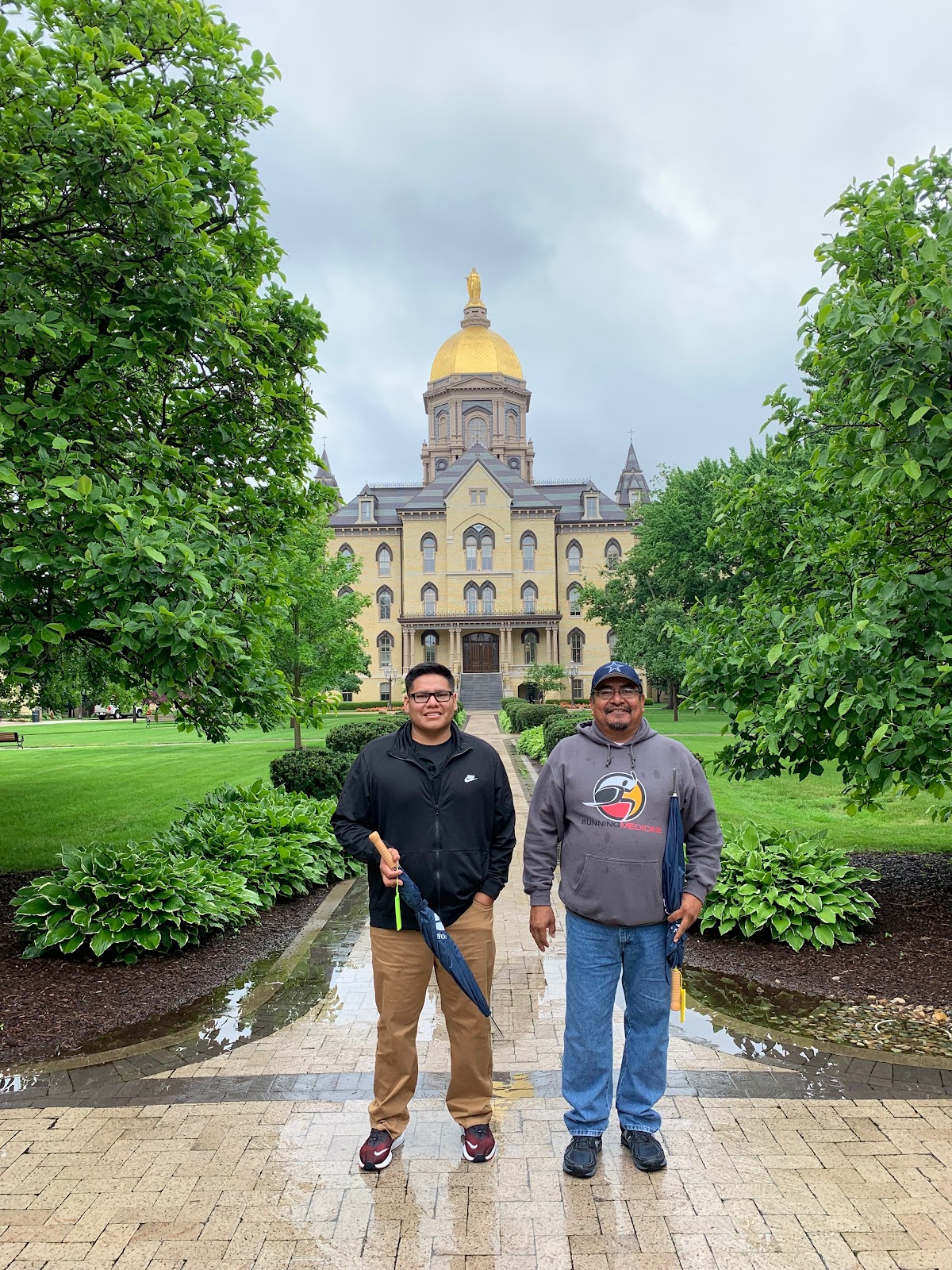 Gabe and Carl had an amazing time on Notre Dame’s campus. Gabe said this conference “was a tremendous opportunity for my school, our students, and for me. I am very grateful.” They were given a tour of campus by a few AICSN interns and later had the opportunity to go on the football field with the conference team. The weekend consisted of speakers, breakout sessions, and insightful discussions. Both teachers gained valuable information that will help them as they continue to build up the sports community at their schools. Gabe was reminded that “it is our mission to make sure that coaches and families understand our concept of team spirit, full effort, and leadership. I look forward to spreading this word.”

Many of the schools in AICSN do not have athletic programs due to a lack of resources and participants. This summer, AICSN intern, Mikaela Ramsey, has submitted a grant for Saint Joseph Mission School for athletic equipment. This would allow Gabe to organize a youth football team, a program that he has been hoping to build. It would also allow for other sports to be offered as well. Soon, Ramsey hopes to submit a grant for every school within the network that hopes to foster community, confidence, and leadership through sports. The Play Like a Champion conference is a reminder of the importance of sports for the social and physical health of a child. It is vital that students are exposed to adults who make their health and happiness a priority, so they can carry that mindset with them throughout their lives. Gabe and Carl both hope to return to the conference next year and continue to develop their sports program and leadership skills. AICSN hopes to send more teachers in the future to ensure that all the children in our network schools will get the chance to benefit from the gift of sports education.