The Body of Christ is filled with stories of hope.Stepping back to reflect on a list of hope-filled experiences I’ve witnessed in education left me humbled… the list is nice and long, but here are just a few examples: 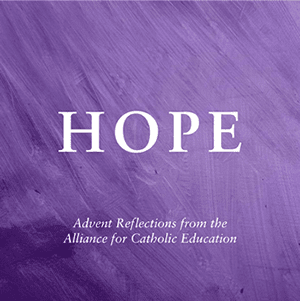 Truly, the list goes on and on. However, the stories of those members of the Body of Christ don’t stop there. Whether it’s the challenges of growing up, moving to a new school, the bad luck of a lay-off, or all-too-prevalent racism and marginalization, we know that the folks I just mentioned are likely to come across struggle again and again.

In fact, we all are likely to incur an ebb and flow of struggle to some degree throughout our lives. Jesus doesn’t promise that we’ll be free from struggle - in fact, His death on a cross should probably be a reminder to us that struggle is in many ways woven into the fabric of our humanity.

I am not optimistic that tomorrow we will wake up and avoid struggle, but I am HOPEFUL that this struggle and our fighting for those who struggle will bring about some step of progress.

When thinking about the footsteps of the members of the Body of Christ I’ve had the privilege of walking with, I cannot help but think about this reflection from the Constitutions of the Congregation of Holy Cross: “The footsteps of those who called us to walk in their company left deep prints, as of people carrying heavy burdens. But they did not trudge; they strode. For they had the hope.”

May we all use this Advent season as a time to reflect on those who carry crosses we could not imagine, and may that reflection animate us to fight and stride on with a hope that reminds us that The Best Is Yet To Come.