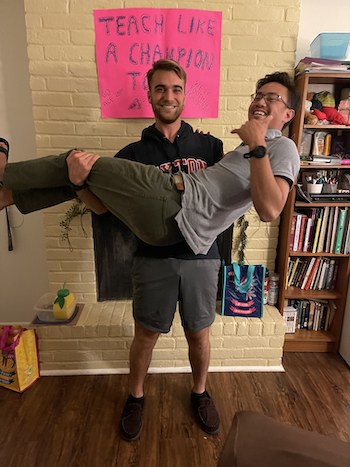 For many ACE teachers, their school communities become a home away from home. Early mornings and sometimes late nights are spent at school, prepping lesson plans, coaching, or cleaning up to get ready for another day. While an ACE teacher’s classroom or school building can become as familiar as the house they live in, the parish community can also provide a welcoming space during a time of transition.

DJ Needham and Eric Av, two first-year ACE teachers in Austin, Texas, are experiencing the joy and community that comes from getting involved in a local parish.

“St. Ignatius, which was founded by Holy Cross Sisters, has kind of become my home away from home. It’s a tight-knit community with a lot of young people, and a lot of families from school go there as well,” DJ says.

For DJ, attending Sunday Mass at St. Ignatius has become an important—and very special—part of his week.

“One thing that I’ve really appreciated, and that gives me goosebumps every time I see it, is when I go to Mass at St. Ignatius and see my students altar serve. I think it’s the coolest feeling in the world to see the students that I teach on a daily basis blessing the Eucharist with the incense. I altar served, so I kind of see myself in the boys up there,” DJ says.

Like DJ, Eric has also gotten involved in a local parish. For Eric, this has provided him with a long-awaited opportunity to become an official member of the Catholic church. Since his sophomore year at Gonzaga University, Eric has been interested in starting the Rite of Christian Initiation (RCIA) process. The timing hadn’t worked out yet, but moving into the ACE house, which is next door to St. Louis Church, gave him the opportunity he was searching for.

“I started RCIA at St. Louis, and it has been very eye-opening to be part of a Catholic community with people of all different backgrounds and ages. It’s great to meet the people there who have information to share that I can listen to and take in their perspective,” Eric says.

In addition to Sunday Masses and RCIA, DJ and Eric have also sought opportunities to get to know other young Catholic adults in Austin.

“One of the other places I’ve explored is St. Mary’s Cathedral in downtown Austin. I went there with a friend one day, and everyone was so friendly. Fr. Daniel Liu came up to me and my friend after Mass and said, ‘Hey, what are you doing in town?’ I told him that I teach middle school math at Santa Cruz, and he responded, ‘Oh, are you in the ACE program?’” Eric says. 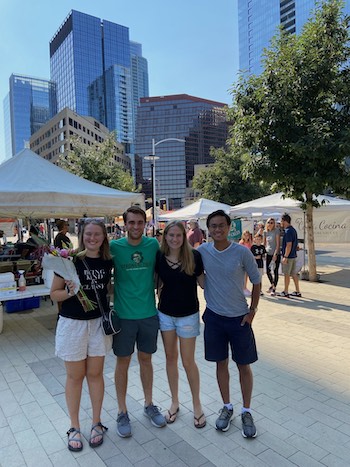 “He invited me to join the young adult group, and DJ and I both went to adoration on a Thursday night. We went to the social they had afterwards, and we ended up meeting several people within the span of 15 minutes. It was pretty awesome because up until that point, we hadn’t really talked to anyone except our coworkers,” Eric says.

For Eric and DJ, seeking out Catholic community in Austin is something they knew was important to them, especially after experiencing the highlights of community during their ACE summer.

“Eric and I have talked about how it’s challenging to go from a place where everything is right in front of you to then come to Austin and not have that right at your fingertips. Over the summer, Mass every single night in the chapel was a constant, and now we’re having to go through that process again of developing our own faith practices that aren’t one floor down from us every night,” DJ says.

As they continue to explore Austin and settle into life there, DJ and Eric are looking forward to developing new relationships and continuing to strengthen their faith. On this journey, they’re grateful that they have each other for support.

“A few weeks ago, Eric mentioned that when Jesus went out and preached, he tried to change one person and that one person tried to change another person. It happened on an individual relationship level, and through the conversations that Eric and I have, we’ve found that with each other,” DJ says.

Learn more about the experience of ACE Teaching Fellows at ace.nd.edu/teach

Attending to Executive Functions during Advent

"Beware that your hearts do not become drowsy."

A Day in the Life of a STEM Teacher

Giving the Full Measure You Have Received