One day they said simply, “yes” and everything changed.

Erin and Phong Vu never could have imagined the life that would unfold from accepting the invitation to teaching with the Alliance for Catholic Education (ACE). 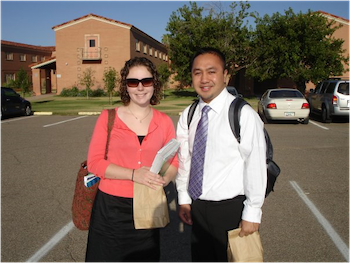 “I love ACE because they have this flair for the dramatic. The night you get your placement they had all these trifold boards set up, and they go from east to west,” she said. “I’m from Jacksonville, Florida, and they started there. With every step, I was getting further from home.” On one of the last boards, Erin saw her photo among seven others. “Finally, I see Tucson, and it said high school English and St. Augustine Catholic High School.”

One of her housemates, Phong Vu, was also there that night. “I met Phong and said hi, and he was really quiet, but he was also placed at the same high school teaching biology and science, so it was great,” Erin said. “We had two years where we carpooled every day, and at the end of the two years, we decided to get married. Well, we got engaged between the first and second years of ACE, and got married at the end of the second year. So, by the time we went out for graduation we were actually already married.”

As the two described their first meeting, sitting shoulder-to-shoulder, filling the Zoom screen with their smiles, Erin asked, “Did I miss anything for you?” “No, that’s about right. You did a good job,” replied Phong. They complement and compliment each other - making a dynamic team. 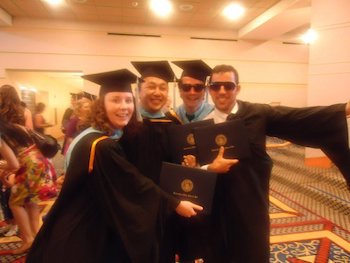 And for the first time, ACE is recognizing a team with the Michael Pressley Award for Excellence in Catholic Education. The award is given annually to graduates of the ACE Teaching Fellows program who have distinguished themselves in making significant contributions to the ministry of Catholic education. ACE is celebrating Erin and Phong, both members of ACE 16 in Tucson, and the 11th (Erin) and 14th (Phong) cohorts of the Mary Ann Remick Leadership Program, for their outstanding service to Catholic Schools.

“At the time, we thought we’d stay in Tucson one more year. Long story short, we stayed 12,” Erin said. She, Phong, and their five children recently moved to Austin from Tucson as Phong begins his tenure as the principal of San Juan Diego High School and Erin at Holy Family.

Their work as school leaders, coupled with their efforts in pursuing additional degrees and licensure through the Remick Leadership Program, and Erin as a coach for the Latino Enrollment Institute, combined with the sacramental and vocational witnesses they are as a married couple committed to this work together—all while raising five children—are remarkable.

“Since our initial ‘yes’ to ACE in 2009, it's been interesting to see what our little yeses have led to. Doors open and things unfold, and it's led us to a network of people and a community of faith,” said Erin.

“I had this subtle call to become a teacher, but my entire life I was always supposed to become a doctor,” Phong said. “That’s what I was told I was supposed to do. I come from a disadvantaged background. My parents are immigrants and never went to school. I grew up not knowing English until kindergarten. I had great educators along my way that helped me become better. My senior year in college I finally said, ‘I feel like I was meant to become a teacher.’”

A friend of his from high school, Patrick O’Brien, (ACE 15, Phoenix) encouraged him to apply to ACE. Phong answered “Yes!” to the call he’d been trying to drown out, but his parents weren’t as sure.

“This wasn’t the path they had planned for me. But my parents are awesome and are very devout Catholics, so once you throw God in there it's hard to say no,” Phong said. “They love what we both do. They see the passion there and see it was an authentic call.”

Although initially skeptical, Phong’s parents became incredibly supportive. “With our careers as teachers and now as leaders, they see that this is truly is a mission that we're trying to make God known, loved, and served beyond just our own family,” he said. “They see the life that we built for ourselves: our marriage, our kids, and our family.

“It's all those little yeses along the way—of ACE and then Tucson and staying in Tucson and Remick—they’ve all led to one amazing blessing after another, and again we can't ask for a better life. It's just wonderful.”

The yeses continue and new doors have opened.

“We often reflect, pray, and discern together where we are supposed to be right now, and every time there was this real sense of peace that we're right where we're supposed to be,” Erin said. “Recently it felt like Austin was where everything unfolded, and it was like, ‘Okay, Holy Spirit, I guess that's where we're going.’”

And so they embarked together. “Whatever needs to be done, we just do it,” said Phong.

“It's that friendship, that partnership, that working together,” Erin said, “Phong put it nicely that it's not work and kids, it's that blending. And we’re both leaving communities (in St. Augustine and Our Mother of Sorrows), where that’s the nature of things. Family doesn’t mean just mom, dad, kids, it’s everyone.”

The Vus look forward to continuing the mission in their new school communities, as well. “Faith flows into everything that we do,” Erin said. “Striving to share the Catholic faith with all of the family, the children and the parents and the friends of a school, and the whole community. We look forward to helping these children to be the fullest version of themselves.”