“I was ordained on Saturday, I celebrated my first Masses on Sunday, and then I celebrated even more Masses on Monday,” said Fr. Drew, who was the middle school social studies teacher and assistant principal at St. Adalbert as part of his assignment to St. Adalbert and St. Casimir parishes. 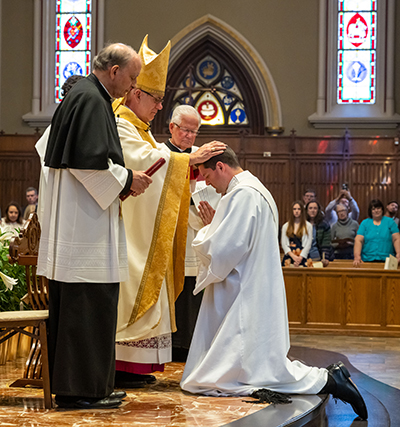 “When I went back to school on Tuesday, it was completely unchanged,” he said. “I was back to lining up students in the hall, reminding them to stop talking, and saying all of the things that any teacher says a thousand times a day. I caught myself halfway through the day realizing that it was an interesting mash-up of things that are completely different and things that haven’t changed.”

It wasn’t too far from Fr. Drew’s days as an ACE teacher, when he taught at Most Pure Heart of Mary Catholic School in Mobile, Alabama, as part of ACE 16.

“Through my time teaching in ACE, I fell in love with Catholic schools and teaching,” Fr. Drew said. “After my time as an ACE Teaching Fellow, I worked in ACE leadership, and through my association with several Holy Cross priests, I came to know the Congregation very well. My vocation to the priesthood developed from a desire to serve, into a sense of a call to teach, and at last into the feeling of being at home in the Congregation of Holy Cross.”

Since ACE Teaching Fellows started in 1993, more than 40 graduates have entered religious formation. Fr. Drew was one of three men ordained as priests in the Congregation of Holy Cross in April. Family and friends from far and wide showed up to support him on his ordination day.

“It was an amazing cross-section of my life,” Fr. Drew said. “My immediate family, some extended family, people from my hometown, ACE classmates, friends from South Bend, and some parishioners and families from St. Adalbert and St. Casimir came to the ordination. I’ve been really grateful to God throughout formation for the countless people He’s put in my life who have loved me and prayed for me, and it was really special to have such a tangible representation of them.”

One of the special guests at the ordination was Damian Cabral, an eighth-grade student whom Fr. Drew taught and coached at St. Adalbert’s. During the ordination, Damian testified before Bishop Kevin Rhoades of the Catholic Diocese of Fort Wayne-South Bend about Fr. Drew’s readiness for priestly ministry – being sure to note that persistence and hope through a losing basketball season was one of Fr. Drew’s strengths, which prompted a chorus of laughter from the packed Basilica of the Sacred Heart.

Fr. Drew graduated from Notre Dame as an undergraduate, taught as a member of ACE, and then entered formation in 2015. Now, in the first few months of his priesthood, he continues to adjust to his new role.

“Priestly identity is an interesting thing,” Fr. Drew says. “Even though we’re prepared for seven years, nothing can really prepare you for hearing confession or confecting the Eucharist. There’s a lot to settle into, and there’s a juxtaposition of new things and old things. I’m figuring out how that shakes out together into me.”

The chalice that Fr. Drew now uses to celebrate Mass is a special symbol of the juxtaposition of the old and new in his life. “When I was selecting my chalice, I asked my mom to talk to the pastor from St. Louis, my home parish, to see if they had any that weren't being used,” said Fr. Drew, who grew up outside of San Antonio. “The one I chose had an inscription on the bottom that says, ‘From mama and dad and the St. Louis parish community.’ Now it’s really special for me to have this tangible relic of my time growing up in Castroville, Texas.”

As he looks ahead, Fr. Drew is excited to continue his ministry at St. Adalbert for the upcoming school year. He’s grateful for all of the prayers he’s received and asks for continued prayers.

“I’ve been really humbled throughout formation by the number of people who pray for us,” Fr. Drew says. “I would ask for prayers that I keep the important things first—my prayer life, my conformity to Jesus and being a priest of Jesus Christ, and ultimately becoming the priest that Jesus and the people need and want me to be.”