Mentor principals have played a critical role in the success of the Latino Enrollment Institute (LEI) since the program’s inception in 2012. The experience, accountability, and personal attention that these leaders provide has been a defining characteristic of the LEI, helping Catholic school principals—and their teams— institute lasting changes.

After schools attend the LEI summer conference, mentor principals maintain regular contact with the 4-6 school leaders in their group through monthly video conference calls. These conversations, which focus on various themes related to Latino outreach, recruitment, and enrollment, are an opportunity for school leaders to learn from one another and receive real-time consultation and feedback from their mentor on some of the things that they’re doing in their school.

The commitment of our LEI mentors, most of whom are still active Catholic school principals themselves, is truly the engine that drives the LEI.

What has been the biggest blessing of being part of the LEI for you and your school/diocese?

There have been so many blessings that were an outcome of working with the LEI. Most significant was the unification of two previously separate communities. As we began the LEI work in a school in Boise, Idaho, that was 95% Caucasian, a transition occurred. I attribute the shift to the work of the Holy Spirit. We started slowly, but expediently the work began to take on a life of its own. Examples of community building could be seen at every juncture. The church had a Mexican dance group, and students from the school began enrolling. Within a year, the group was made up of a variety of ethnic backgrounds. The annual tamale-making event became a cooking lesson, with the Latino community teaching the other school parents how to make tamales. Parents from the Latino community began to enroll their children in the school. Watching the interactions increase during drop-off and pick-up of students between parents of the two cultures was a heartwarming experience to observe.

What is the best part of being an LEI mentor?

The best part of being a mentor is watching people grow and blossom. I've been blessed to mentor such outstanding principals. Each school leader begins in a different place, each with a willingness to embrace change, each person facing their own struggles, but working through those struggles. The transformation going on within the schools that I've had the opportunity to mentor is phenomenal. I learn so much from each mentee, and I am blessed to have the opportunity to work with them. 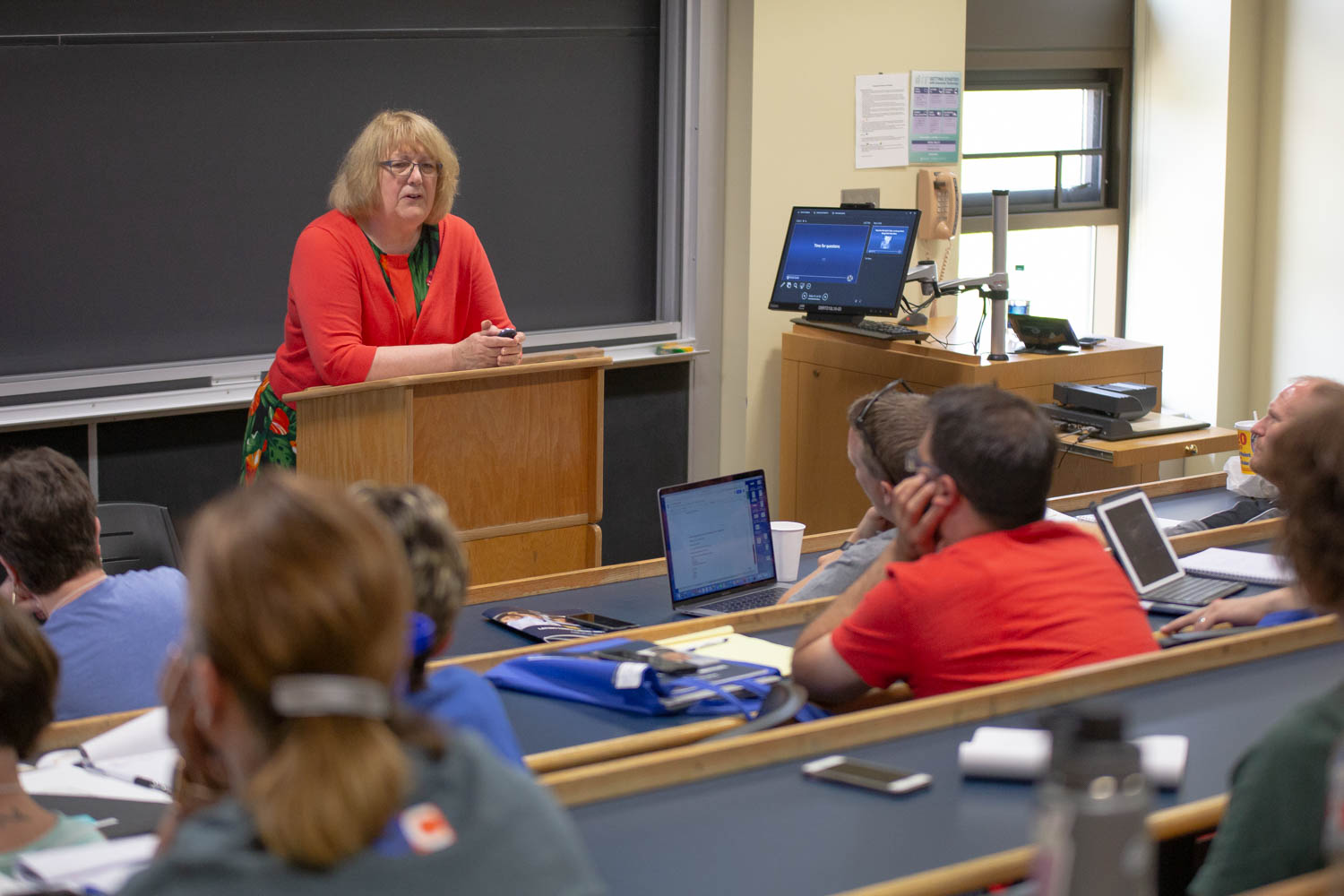 What do you like most about being a superintendent?

What I like best is being able to evangelize and set in place increased prayer opportunities for our students and families. In just the past ten months, we have evidence that more of our students are actively engaged in prayer, and families see the benefit. Each day, all of our schools begin the day with community prayer. This replaced prayer over the public address system. The PA systems in our buildings in Maine were antiquated at best and really hard to hear (think Charlie Brown voice). Each school now gathers in a common gathering place and prays together. More and more parents and grandparents are staying for morning prayer. Parents are asking for a copy of the prayer. We see people take out their cell phones to take a picture of the prayer for the day. One family that was the most resistant to the new process, as it was something different, is being baptized this Easter!

What has been the most interesting and/or surprising transition for you as you moved from grade school administrator to superintendent?

Had I answered this question a month ago, my answer would have looked much different. It has been an interesting time to be a first-year superintendent. The Coronavirus has quickly changed how we educate and deliver services to our Catholic school families. Fortunately, I began discussions and training with my principals about six weeks before the outbreak and subsequent school closures.

First, we began by live-streaming our school Masses. We begin each day in our schools with our morning prayer virtual assembly. Grounding our work in our faith and keeping close to the Holy Spirit has been the foundation of our distance learning work. Ensuring that relationships are sustained and Christ-centered is critical.

We are only one week into this new endeavor, but I couldn’t be more pleased with the collaboration of my leadership team and my principals. Maine is a big state, our schools are spread out, but with the use of technology we have continued our leadership meetings.

Tell us something interesting about your childhood.

My childhood looked different than most. Both of my parents, as well as my stepfather, were totally blind. There were two guide dogs in the home until I became old enough to help my parents navigate. I grew up listening to talking books, but upon entering school, the Sisters told me I had to learn to read. I remember telling one of the Sisters about the value of talking books. What I didn't know was that my childhood was unusual. My mother still kept an immaculately clean home, and she baked often. She would say when she would undertake making 25 pies at once, that if you were going to make a mess, make a big mess! She canned fruit, made jelly, and there were always cookies and milk waiting for us after school.

We walked or rode our bikes everywhere, and we carried all of our groceries home, sometimes pulling a wagon. My dad went to work daily; he was a piano tuner. Mom ran the business for him, setting up appointments over the phone. She had an elaborate filing system of braille cards as a tracking system for clients. Mom made sure all three of us attended St. Mary's Catholic school and somehow managed to put us through Bishop Kelly Catholic for high school. My parents never accepted any social services or welfare aid. My mother relied entirely on her faith. We were financially poor, but we were rich in faith.

How would you describe yourself at ten years old?

As a ten-year-old, I had about six months left of my childhood. My stepfather, the only father I had known, passed away suddenly from a heart attack. I remember the exact moment - I was sitting on the porch stairs, praying. I knew I had a decision to make. I could be a victim, or be a survivor. I had to step up and help the family. Mom was a blind widow. I was the oldest, and I had a five-year-old brother and a one-year-old sister. I began raking leaves, babysitting, and even selling night crawlers to fishermen to help mom and support the family. God served as my strength and as my family’s strength during this difficult time.

Before becoming a Catholic school principal, what was the most unusual or interesting job you've ever had?

I've had several unusual jobs; however, the most exciting job was when I served as a teacher for the blind in the back hollers of West Virginia. I worked for Vocational Rehabilitation, an organization that had helped me during my twenties with my own eye surgery. Serving as a teacher for the blind, I would travel to the homes of people who were losing or who had alredy lost their vision. I would teach the skills they most missed. A lot of times for the women, it was how to cook. I recall one man wanted to learn to fish, so I taught him how to fish. My favorite client was a woman, Sadie, who was deaf and blind. I taught her braille; years later, she wrote to tell me how braille had opened up the world to her.

If you could meet anyone in the world (alive or deceased) who would it be and why?

I look forward to the day in heaven that I meet my grandfather Atticus Ragsdale. My biological father passed when I was 18 months old, so I know very little about the paternal side of my family. I recently discovered that Atticus Ragsdale served as the Superintendent of McCracken County schools in Kentucky in the late 1800s. He and I need to compare notes! My guess is it would be an interesting conversation!

What is the best place you've traveled to and why?

I've traveled extensively throughout Europe, and I've visited every state except for Hawaii. In my opinion, there is no place like home. The Teton mountain range and the Sawtooth range in Idaho are stunning. Sitting by the lakes outside of Stanley, Idaho, is the best place in the world to relax and see the splendor of God.

If you won the lottery, what is the first thing you would do?

I would need to support the work of the LEI. Seriously, the work Fr. Joe Corpora is doing is outstanding! The value I have seen in building our Catholic schools and building community is truly the work of God.

In 2013, while serving as Principal of St. Mary's Catholic School in Boise, Idaho, Marianne attended the Latino Enrollment Institute at the University of Notre Dame. Interested in learning how to attract the growing Latino population in the parish, as well as the surrounding community, Marianne took back several new strategies and implemented new practices to substantially grow St. Mary School's enrollment and make Latino families feel more at home there.

Read the full story about how Marianne, upon returning to her roots at St. Mary's, embraced the changing demographics of the community and helped to transform her school.

After leaving Idaho in 2014, Marianne moved across country to Maine, where she served as the principal of Saint Dominic Academy in Lewiston, Maine, and now as the Superintendent of Maine Catholic Schools.

Marianne is known nationally for her contributions to Catholic education. On two occasions, her schools received the Innovation in Catholic Schools Award. The distinguished award is presented by Today’s Catholic Teacher. She has also served on the executive board of the National Catholic Schools Association (NCEA).

If you're interested in learning how to recruit, enroll, and better serve Latino children in your school, as well as work with an incredible mentor like Marianne Pelletier, consider joining the LEI!

Learn More about the LEI

Interested in learning more about the Catholic School Advantage?