When Maya Duff read The Long Winter, a book in Laura Ingalls Wilder’s Little House on the Prairie series, to her three daughters, never did they think they’d have to boil water to take a bath or use snow to flush their toilets in Austin, Texas. 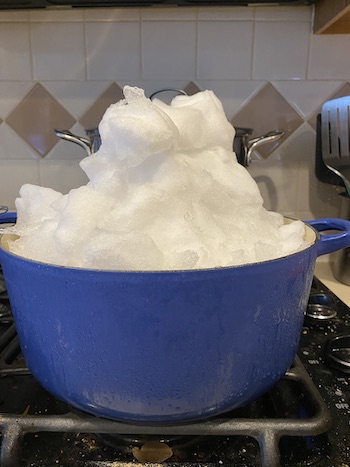 Then came Winter Storms Uri and Viola, and Maya and her family went without running water for five days and access to groceries. And so came the idea behind her new children’s book, Snow in our Potties! (The Storm Made Us Do It).

“It was hard, but it left us with a great sense of gratitude for our daily lives,” said Maya, who taught second grade in Memphis as a member of ACE 12. “I just wanted to emphasize that.”

Drawing on her family’s experiences and those of others in Texas, Snow in our Potties! describes in rhyme how a family made it through the two winter storms as they sledded in laundry baskets and jumped into frozen pools to rescue dogs.

Maya is donating a portion of proceeds from the book to the Central Texas Food Bank and Water Mission to show appreciation for access to food and clean water.

“During the snow storm, we were so lucky,” she said. “Our freezer is full, our pantry is full. So even though we couldn’t get groceries, we had enough food to manage, where a lot of people were worried about literally starving because they didn’t have the ability to be that well stocked beforehand. I was just grateful for everything we had.” 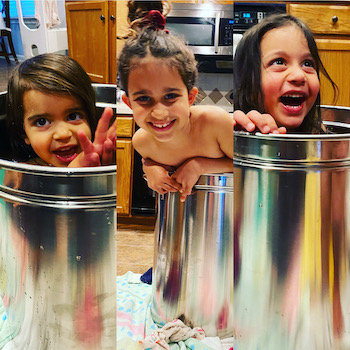 Maya had just finished reading The Long Winter to her daughters, ages 7, 5, and 2. In the novel, Laura’s town is battered by blizzard after blizzard, and the town’s food and fuel supplies run out.

“They literally didn’t have food in their whole town, and they obviously didn’t have running water,” Maya said. “So (we felt), we were way better off than that.”

That sense of gratitude took root after she graduated from Notre Dame with a degree in psychology and joined ACE.

“In ACE, you had to make a lot out of a little. We didn’t have a lot of money or resources, but we still obviously found ways to have fun and have a great classroom,” Maya said. “So that sense of resourcefulness has come in handy throughout my life. After ACE I was a volunteer teacher in India, and there were more underprivileged children there. …. Being in both of those teaching situations made me realize how much I grew up with and how lucky I am.” 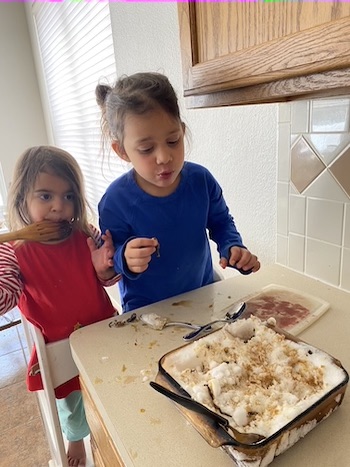 Maya’s oldest daughter had the idea at the beginning of the storms to write a book called The Unexpected Week, which was the original title. Then several people lobbied for a more attention-grabbing title.

“It’s funny because if I mention it to any moms here, they are like, oh my gosh, we were having snow in our potties,” Maya said. “And the kids too. Most kids in this area remember having snow in their potties.”

Maya would think back on the family’s experiences during the storm, put together the rhymes, and run them by her daughters.

“I just made up a list of memories from the snowstorm and tried to incorporate as many of them as I could,” she said. “They helped me come up with those memories.”

Several months after the storms, Maya’s family still talks about what they learned.

“We’ll pray in the morning and say what we’re thankful for, and I’ll still occasionally say, remember how awesome it is that we have running water and electricity and food,” Maya said. “It was really cute, when our water came back, the kids were so excited, they were facetiming all their grandparents and turning on the taps, then giggling like it was the first time they’ve ever seen it.”

You can order your copy of Snow in Our Potties! on Maya's website, Amazon, or in hardcover at Target and Barnes and Noble.

A portion of proceeds is being donated to the Central Texas Food Bank and Water Mission, as a token of appreciation for the everyday luxuries of access to food and clean water.

"Be curious, not judgmental" - (Not) Walt Whitman

Celebrating the transformative power of the Latino community