Limon and Hernandez-Gonzalez volunteered with the St. 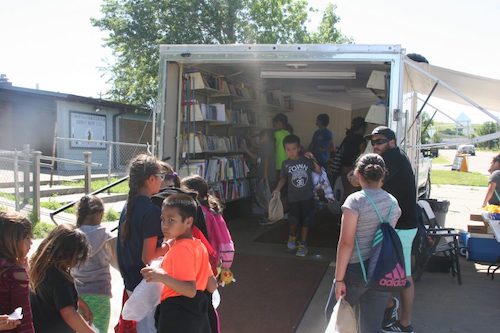 Joseph Indian School Bookmobile through the Summer Service Learning Program at the University of Notre Dame’s Center for Social Concerns. The bookmobile is operated by St. Joseph Indian School, which educates approximately 200 children per year in Chamberlain, South Dakota. This school is one of the eight members of the American Indian Catholic Schools Network.

Limon was motivated to work on the bookmobile to get to know the American Indian community better. Hernandez-Gonzalez became interested in this opportunity after taking a Native Studies class.

The goal of the bookmobile is to keep kids reading during the summer. Every Monday, the bookmobile crew restocked the book bins and participated in a send-off prayer with the St. Joseph Indian School staff before setting off to deliver books at many sites throughout the week. 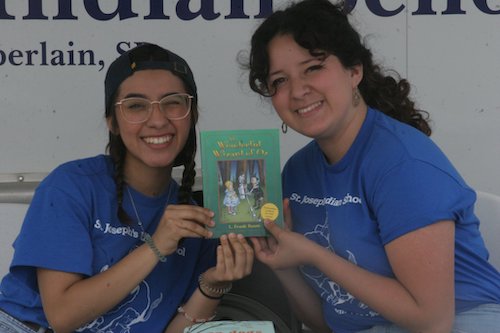 All of the Native American Reservations in South Dakota, including a few in North Dakota and Nebraska, were included in the 43 communities that the bookmobile visited. Limon said that upon arriving at a new location, it was commonplace to see a bunch of kids from the neighborhood running out to greet them. “It was like we were an ice cream truck,” he said. “But we didn’t have ice cream, we had books.”

Herndandez-Gonzalez said that the books were organized by category, which was helpful when children arrived looking for books about cartoons, dogs, or other subjects. When one child came in with a passion for Spongebob, Hernandez-Gonzalez and Limon gave him every single Spongebob book that they could find.

Through their service, these two Notre Dame students inspired a passion for learning. As Limon said, “All the kids wanted was books, and I never thought I would see a kid so excited to get their hand on a book.”

This initiative is made possible by Andy Lepkowsk, who has served as the bookmobile coordinator for several years. Both 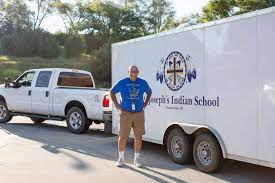 “Andy was such a pleasure to work with because he genuinely wanted to help people,” Hernandez-Gonzalez said. “He reminded me of where I want to go and the type of person I want to be.”

Hernandez-Gonzalez was grateful for her experience in South Dakota. She said that she learned a lot about the Lakota, Dakota, and Nakota cultures, gained a broader historical context, and learned to connect more easily with others. Similarly, Limon said that she grew as a person throughout my experience. “It taught me a lot about responsibility, having a boss, and interacting with people who are different from me,” she said.

The St. Joseph Indian Bookmobile will hit the road again next summer. If you want to learn more about the Bookmobile, you can read this story from St. Joseph’s Indian School.

Learn more about the network and the school communities we serve.