“What makes this sin so special?” asked Gloria Purvis about racism. Standing in front of the ACE community, the renowned author and speaker called on the gathered teachers, leaders and students to see racism through the lens of the Gospel.

Purvis said people generally think of racism as a political idea or how they treat someone, but few understand it as a sin. 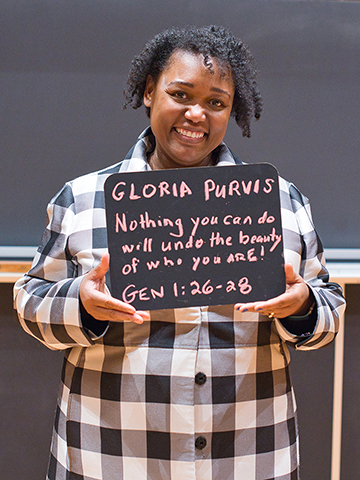 “So few realize that it is a grave evil and a rebellion against God’s plan for the human family and for human happiness,” Purvis said. “I think when we start to deal with and understand racism from that perspective, it frees you from all the political party talk.”

Purvis spoke Tuesday to members of ACE Teaching Fellows, the Mary Ann Remick Leadership Program, and visiting high school students from Tucson who are part of ACE’s PATH program. She repeatedly came back to Genesis 1: 26-28 in her conversation, particularly verse 27:

Purvis used the passage to explain that through laws, customs and practice, only a few people in the United States were considered “royal status,” granted by being white.

“We haven’t thought about the entire remaking in people’s minds of the human person,” Purvis said. “To have such a regime of slavery and how that in and of itself is a direct rebuking of God’s word of who he says we are.”

Purvis hosts the Gloria Purvis Show on American Media’s podcast network. She formerly hosted EWTN's Morning Glory, and she has served on the National Black Congress' Leadership Commission on Social Justice, as an advisory board member on the Maryland Catholic Conference's Respect for Life Department, and the Archdiocese of Washington's Pastoral Council. In 2021, Notre Dame appointed her as the inaugural Pastoral Fellow in the University's Office of Life and Human Development. She began her career in the finance industry before becoming a whole life advocate, an ideology that opposes abortion, capital punishment, assisted suicide, and euthanasia.

In her talk, Purvis also touched on the differences people had in conversations about George Floyd’s death.

While Purvis spoke of racism from a political standpoint, she also discussed racism as an educator. She described her experiences in Catholic schools, giving an example of how her peers and her teachers were surprised she would be in honors classes or understand the subject material even though she scored high enough to be placed in those classes.

“I say this to you because you might see that yourself, not as a student, but by your position and these places of education,” Purvis said. “Then the questions come to you, ‘What do you do?’ and ‘How do you maintain your job and still be a witness for Christ?’”

Purvis said she regretted not speaking up while she was in school and how this affected her white classmates. She wondered why there wasn’t a place or a person in the school she could have gone to with these concerns. 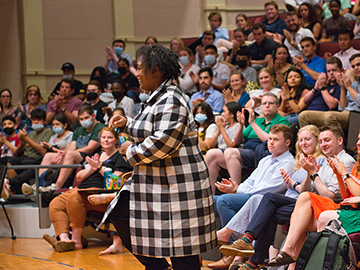 Purvis added that there had to be mythmaking around blackness for people to believe that others were not humans, and that racism has been sown into the grounds of this country.

“I don’t want you to be discouraged because I believe that everything we have as believing Catholics can uproot that from the soil of this country, but it takes work,” Purvis said. “It takes prayer, it takes sacrifice, it takes courage. Courage like ‘I’m going to be put on a cross’ courage.”

An ACE teacher asked Purvis about a situation at his school when a student used social media to talk about the racist comments she had heard at their school, noting that the administration did not take action against the comments.

Purvis responded by saying the best way to help students of color going through similar situations is to listen to their point of view.

“We want to have community… and to have those discussions and do better,” Purvis said. “To me that is always a nice thing, to ask those questions and listen for understanding and try to be a bridge.”

Collaboration, Corners, and Competition: A Glimpse into a Middle School ELA Classroom in Louisville, Kentucky

On a Journey to Sainthood, Together: A Day in the Life of a Fourth Grader